Mediator Robert A. "Bob" Cole recently received the 2019 ABOTA Foundation Founders Award at the American Board of Trial Advocates National Board Meeting at the Monarch Beach Resort in North Dana Point, Calif. The award is for an individual who has shown "exceptional vision and commitment to furthering the goals of the ABOTA Foundation."

The award was inspired by three men familiar to Bob who had been the founding force behind the organization in 1992: "Don Keenan, who is an attorney in Atlanta; Reece Williams from Columbia, S.C; and Joe Milton, who has passed away, but he had been my law partner and mentor in Jacksonville." Mr. Milton also inspired FLABOTA (the Florida chapters of ABOTA) to create the Joseph P. Milton Professionalism and Civility Award, to be given from time to time to a Florida lawyer who exhibits the same level of integrity, honor and courtesy in the practice of law. Last month, Bob received the Joseph P. Milton Civility Award from the Jacksonville Chapter of ABOTA.

Bob's honor was only the third time the award has been bestowed. He was nominated by Richard Middleton of Savannah, Ga., who was president of the foundation at the time the Founders Award was established. Mr. Middleton also had great recollections of Bob's former law partner. "Joe was responsible for really bringing the foundation to the position it's in today," he said, adding that Mr. Milton set the standard for all the presidents who followed him. When Mr. Middleton became president, "I wanted to create an award that would recognize unsung heroes of the foundation ... those who had contributed to the benefit of the foundation in some way."

When he became eligible to nominate a recipient, he immediately thought of Bob, an ever-present volunteer and booster. "He has done so much with all the Florida chapters," Mr. Middleton said. "It was just an easy call for me. ... He's there all the time and always has been."

The ABOTA Foundation provides financial and material support for the programs the chapters present, such as Masters in Trial, Civility Matters and a Bob Cole favorite, the Seventh Amendment Symposiums, Mr. Middleton explained. "The foundation is there to get them up and running with these programs." Bob has helped greatly with raising money and signing up new fellows for the foundation. "The foundation is implanted in his DNA."

Bob is a shareholder with Upchurch Watson White & Max and joined the group in 2012. 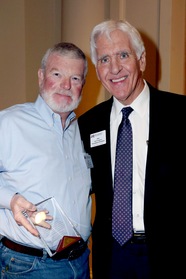