By Catherine Klasne
In a Sunday editorial dated  October 7, 2012, the New York Times observed that, “[A]ttempted hijacking of what are supposed to be nonpolitical retention elections — essentially referendums focused on a judge’s competence and honesty — is gathering steam in Florida. The state has not removed a sitting Supreme Court justice in 40 years, but this year three worthy justices standing for retention — Barbara Pariente, Peggy Quince and R. Fred Lewis — may not survive an onslaught from the political right.”

The paper pointed out that the justices are being targeted for various rulings that have angered conservatives, among them “a 2010 decision that quite rightly struck from the ballot a misleadingly worded constitutional amendment designed to allow the state to opt out of federal health care reform.”

The editorial notes that Americans for Prosperity, an advocacy group financed by the Koch brothers, has begun running television advertisements in several Florida cities criticizing the court’s ruling on the constitutional amendment, and says it is planning new ads focusing on other cases, all with the goal of framing three judicial moderates as out-of-control “judicial activists.”

Commenting on the Florida Republican Party’s Executive Committee’s opposition to the judges announced two weeks ago, the editorial characterized it as “piling on,” and concluded that what is absolutely certain is the damaging message of intimidation that would flow from the removal of the justices.

This phenomenon is an example of the insidious and damaging effects of unlimited outside funds being injected into an essentially local or regional election.  What is particularly unfortunate here is the outside money coupled with injection of party politics.  Quite a quiniela.  It’s no wonder that The Florida Bar is up in arms. 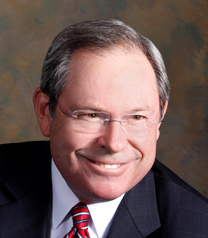 John Upchurch is a principal mediator at the firm of Upchurch, Watson, White and Max.