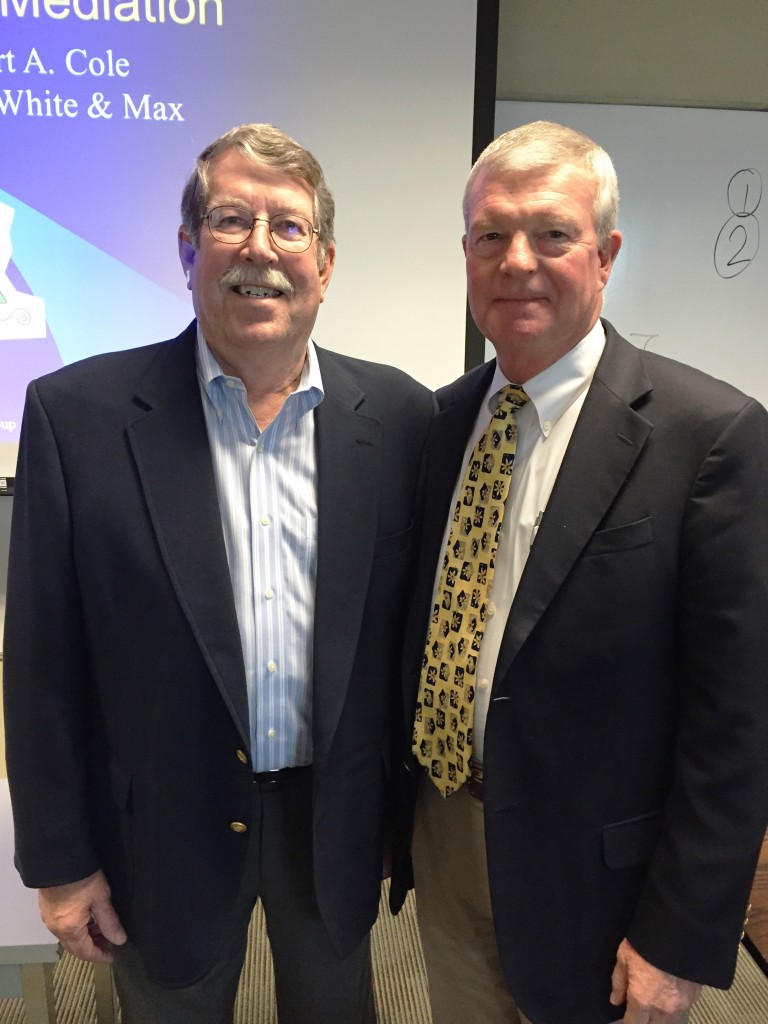 Jake Schickel, left, and UWWM Shareholder/Mediator Robert A. Cole pause for a moment during Thursday's CME program at Florida Coastal.


Bob Cole, Upchurch Watson White & Max shareholder and chair of the ADR Practitioners Committee of The Jacksonville Bar, reports success for the annual Northeast Florida CME Seminar on May 14, 2015. He says about 40 mediators attended the sessions at Florida Coastal School of Law, beginning at 8:30 a.m. with opening remarks from Jake Schickel.

Jake is a founding partner of Coker, Schickel, Sorenson, Posgay, Camerlengo & Iracki and an adjunct professor at Florida Coastal. In addition to performing as host for the seminar, he presented one program on Workers Compensation ethics and another on ethics in recent MEAC (Mediator Ethics Advisory Committee) opinions and court decisions.

Bob revived a favorite UWWM presentation for his afternoon session discussing the ethical consideration that face mediators, attorneys and parties; it had a "Gilligan's Island" theme and was titled "It Was Just a Three-Hour Tour."

The day-long event was the handiwork of Carla M. Ortiz-Ramos, CLE & event coordinator for the Jacksonville Bar. This was her third year coordinating this seminar, which is traditionally held at Florida Coastal. It all went off without a hitch, she said, except for when the fire alarm went off, giving everybody an unexpected break "and a nice little walk."

There was no fire, and all the presenters were able to finish, including Blane McCarthy, who spoke on opening statements;  Terrance E. Schmidt, whose topic was commercial mediations; Julie K. Taylor (domestic violence); and Shaelyn Lain Haag (diversity in mediation).

Coordinator Carla says the event is scheduled for June next year, and Bob highly recommends it for all the mediators in the region.

The ADR Practitioners Committee will now return to its regular schedule for the remainder of 2015, with quarterly luncheon meetings on Aug. 20 and Nov. 12.