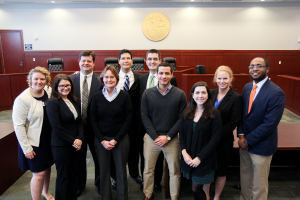 "You and your organization hosted a wonderful weekend for the guest schools," Brandon told team President Nick Alberto afterward. "It says something positive when people travel from as far away as Montana and Buffalo (N.Y.) to attend your school's first mediation advocacy competition." (Nick sent us  a link to the video that was taken of the final round: mediasite.video.ufl.edu/Mediasite/Play/f4d772cc12bb4507a84f2815e029fb2b1d.)

UWWM committed to sponsor and mentor the 4-year-old team in September 2014.