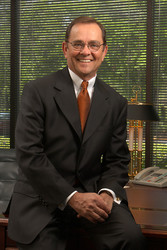 
DAYTONA BEACH, Fla. (March 11, 2015) -- Lawrence M. "Larry" Watson, a founder and principal of Upchurch Watson White & Max, was the first UWWM mediator ever to be recognized by Super Lawyers®. He has been selected for the list every year since 2006. For 2015, he is joined by seven other dispute resolution professionals at the Florida- and Alabama-based mediation group.

Other Florida-based mediators included in this year's list (along with the years each has been selected) are:

Honorees based in the firm's Birmingham, Ala., office and the years they have been selected are:

No more than five percent of the lawyers in any state are selected by Super Lawyers.

Super Lawyers, part of Thomson Reuters, is a rating service of outstanding lawyers from more than 70 practice areas who have attained a high degree of peer recognition and professional achievement. The annual selections are made using a patented multiphase process that includes a statewide survey of lawyers, an independent research evaluation of candidates and peer reviews by practice area, according to SuperLawyers.com: "The result is a credible, comprehensive and diverse listing of exceptional attorneys."