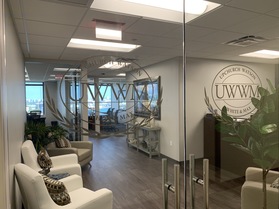 Looking through the office to the view of Biscayne Bay. 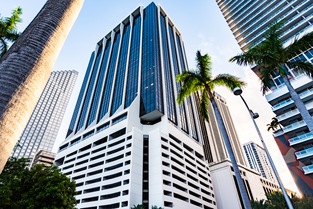 One Biscayne Tower at 2 Biscayne Blvd. 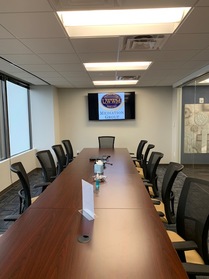 A UWWM conference room inside Suite 2030. 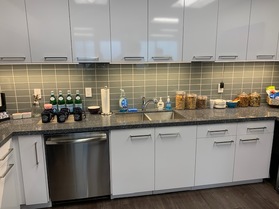 The kitchen is ready for the grand opening reception. 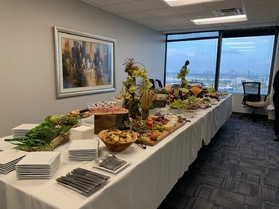 The spread at the UWWM grand opening reception. 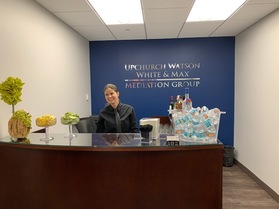 A reception desk can serve nicely as a bar. 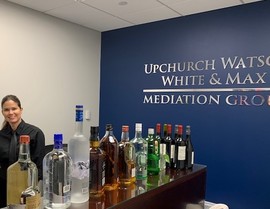 Getting the bar ready for the UWWM grand opening reception.

The new 3,449-square-foot office is in Suite 2030 of One Biscayne Tower at 2 Biscayne Blvd. It has two large conference rooms and six smaller break-out rooms, as well as workspace for the group's two on-site staffers, Cristal Galvez and Alejandrina Perdomo.

Mediators are already resolving important matters there, from complex disputes to the more commonplace conflicts that can disrupt a business or a life. The significance of their practice is mirrored by the building's imposing place in the city's history.

"It is the aim of the firm to provide an attractive, comfortable environment for our clients while mediating with us," said John Upchurch, UWWM's president and CEO. "This beautiful, new facility in one of Miami’s most prestigious office buildings certainly meets that objective, and we are proud to call it our new Miami home."

One Biscayne Tower is described as a signature building of Miami, containing 39 floors and standing 492 feet tall. When completed in 1972, it became the city's tallest building, besting the Dade County Courthouse, which held the record for 44 years. It only took 12 years for the Southeast Financial Center to become the new record-holder, and growth has continued apace since then. Many of Miami's newer skyscrapers are taller, but One Biscayne is still a symbol of the city, appearing often on postcards of the skyline.

"The building appears in a July 1973 article of National Geographic titled, 'Cuba's Exiles Bring New Life to Miami,'" says beyondsquarefootage.com, a website dedicated to exploring Miami's distinctive architecture. "It was designed by Cuban architects Humberto P. Alonso, Pelayo G. Fraga & Associates and E.H. Gutierrez & Associates. The architects received a 1973 Outstanding Concrete Structure in Florida award." Since then, One Biscayne has won five Office Building of the Year (TOBY) Awards, including the 2007 Miami-Dade TOBY Award and the 2007 BOMA Southern Regional TOBY.

Upchurch Watson White & Max's history in Miami dates back decades, as well, since UWWM mediators have long worked in "ready-to-go" office space locally. Significantly, the group completed the build-out of a mediation center in nearby Plantation and satellite space in Miami and made temporary arrangements for conference space in West Palm Beach in late 2013. UWWM opened the doors on permanent offices in Miami, in the historic Biscayne Building on Flagler Street, and West Palm Beach in early January 2015.