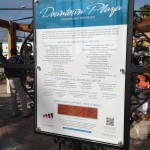 The Daytona Beach Downtown Plaza project was launched in the spring of 2010 when the Design Committee began to search for a neighborhood clean-up project. They stumbled upon the busy intersection of Beach Street and ISB, where they found a vacant piece of land surrounded by a wooden fence. The current land owners have city-approved plans to develop the land into a restaurant but have currently placed them on hold. After being contacted by the Design Committee, the land owners agreed to temporarily donate the land for a public park. The owners have shown great support and encouragement for the development of this project.

The ribbon cutting ceremony for the Daytona Beach Downtown Plaza Project occurred on July 11, 2012. UWWM is proud to serve as “Kiosk” panel sponsors for this worthy project. The ceremony was attended by Daytona Beach Mayor Glenn Ritchy, along with city and county officials and members of the community.