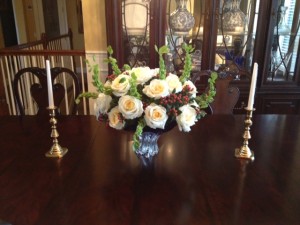 
Michelle Jernigan, shareholder at Upchurch Watson White & Max, hosted a Table for Eight for the Central Florida Association for Women Lawyers on June 4, 2013, at her home in Winter Park.

The theme for the evening was “A Night in Spain,” and 10 women lawyers attended, as well as Michelle’s friend Gail Barley (of Gail Barley Interiors, LLC), who designed the stunning rose centerpiece.  Michelle made and served two dishes from the Columbia Restaurant, the 1905 salad and chicken and rice -- arroz con pollo.

The Tables for Eight, sometimes abbreviated as T48, are a casual networking initiative for CFAWL and have been memorialized on the CFAWL Facebook page.