Graduating law school in 1969, Mr. Watson started his career as a trial lawyer with Carlton Fields, where he developed a flourishing practice with an emphasis on commercial cases. After his exposure to arbitration and special master procedures as an advocate in the mid 1980s, Larry pivoted to conflict resolution, becoming one of the very first attorneys to train as a mediator, later becoming certified by the Florida Supreme Court at the inception of its mediation program in 1988. Following his certification, Larry developed a busy practice as a State and Federal Court Mediator, specializing in the resolution of complex, multi-party commercial cases, and in the mid-1990s, joined forces with John Upchurch and Terry White to form what has become Florida’s most renowned ADR panel, Upchurch Watson White & Max.

Beyond his private mediation practice, Mr. Watson also played an important role during the formative years of Florida’s ground-breaking embrace of dispute resolution. Appointed by the Chief Justice of the Florida Supreme Court, Larry became the long-standing chairman of the court’s Standing Committee on Mediation & Arbitration Rules of Procedure. As Chairman from 1989 to 1994, Larry oversaw the creation of the statutes and procedural rules controlling the mediation process, as well as the ethical standards for the conduct of professional mediators practicing in Florida.

Mr. Watson continues to mediate major cases, both in Florida and across the United States, and has previously been recognized by Florida’s Dispute Resolution Center with an Outstanding Achievement Award. In 2000, he received the Florida Academy of Professional Mediator’s Award of Merit, and in 2007, the American College of Civil Trial Mediators awarded Larry a Lifetime Achievement Award

“We’re delighted to recognize Larry for his almost 40 years in the mediation field,” commented Darren Lee, NADN’s Executive Director. “Most everyone at the top-tier of the commercial ADR market knows of Larry’s reputation for settling tough cases. But, in addition to being an enormously effective neutral, we applaud Larry for the thousands of hours he’s dedicated to the wider ADR community, from his pioneering work with the Florida court systems to his co-founding of the America College of Civil Trial Mediators, his impact is rightly recognized at the national level.”

The Distinguished Neutral of the Year Award is presented annually by NADN to an ADR professional widely considered by his or her peers to have achieved the highest level of excellence in the dispute resolution profession. 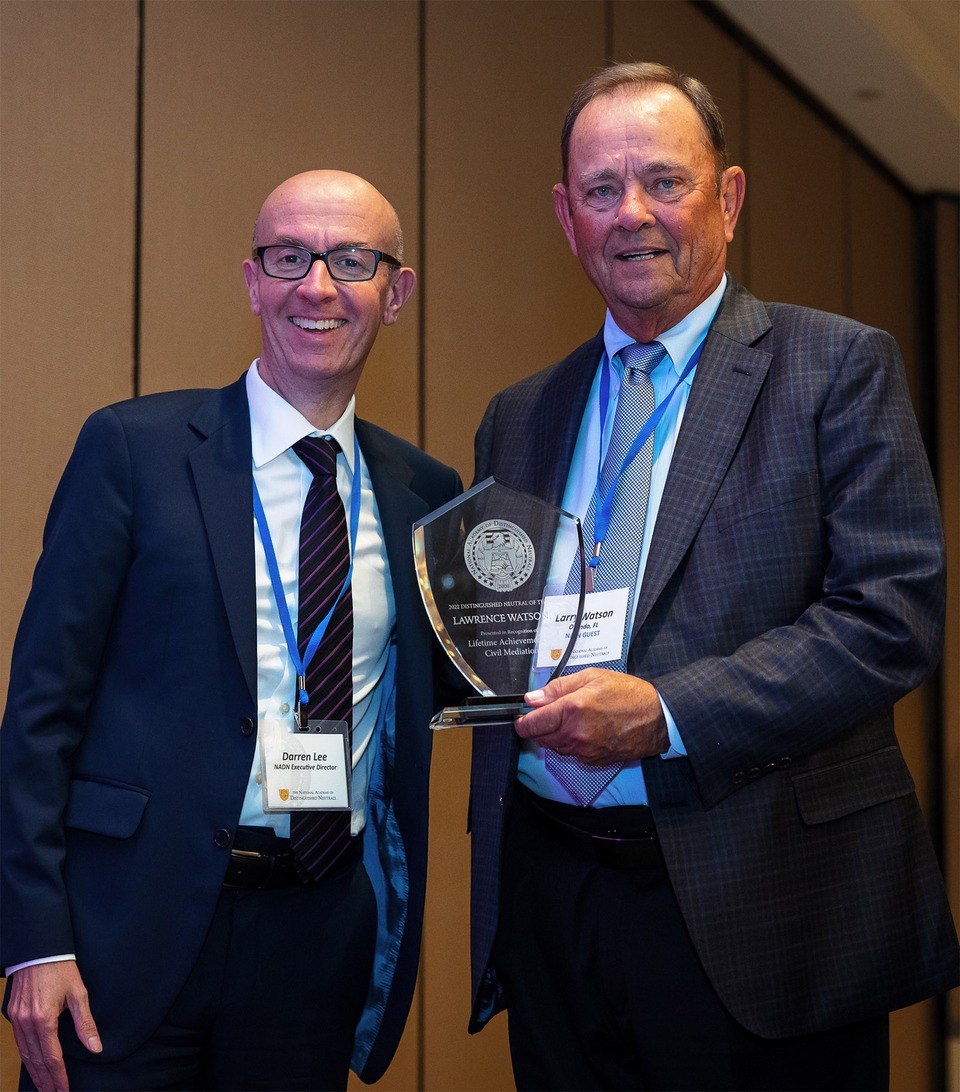