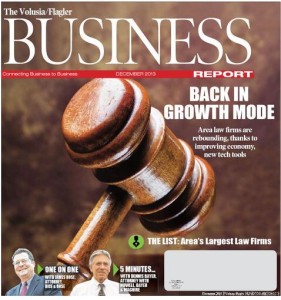 The mood is generally upbeat for law firms in Florida's Volusia and Flagler counties as we approach the holiday season, according to a current local publication. Clayton Park, editor of The Volusia/Flagler Business Report says the fact that law firms are looking up is good news for everyone.

The story is one of recovery, in which local firms "shifted their practices to focus on new areas of demand for legal services." Upchurch Watson White & Max Mediation Group, based in Daytona Beach, continues to follow this strategy of innovation, making use of new technology and becoming ever more client-centric.

Christopher Challis, attorney and partner in White Challis Redevelopment; Glenn Storch of Storch & Harris;  and Robert Merrell and Mark Watts of Cobb Cole also commented for a story concerning the local real estate climate. Plus, Greg Snell of Snell Legal and Heather Vargas of Cobb Cole described the basics of intellectual property law for the issue, which also lists the 25 largest law firms in the two-county area (Upchurch Watson White & Max is tied for ninth with Kinsey Vincent Pyle).