The fundraising event was well attended by prominent lawyers from around the State of Florida.  Justice Peggy Quince gave a short speech to the gathering but unfortunately, had to return to her Supreme Court Office due to the Court being in session.  A highlight of the event was the attendance of Former Florida Governor Reubin Askew and his wife, Donna Lou.  Retired Justice Joseph Hatchett, Justice Leander Shaw and Former First District Court of Appeal Judge Jimmy Joanos were also in attendance.  Everyone had a great time and the event was a huge success. 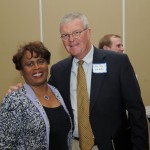