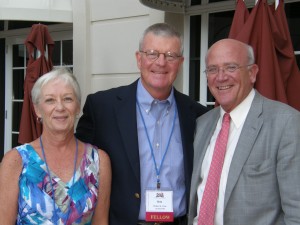 UWWM was honored to sponsor the VIP Dinner at the FLABOTA (Florida Chapters of the American Board of Trial Advocates) Annual Convention on Thursday July 19, 2012.  The convention was held at the Ritz Carlton Hotel in Key Biscayne, Florida.  John Upchurch, Terry White and Bob Cole attended the dinner on behalf of the firm.  The dinner is the opening event for their state convention and its guests are the educational program speakers and national ABOTA dignitaries.  In attendance were Bob Stone-ABOTA National President, Mick Callahan-ABOTA National President Elect, Jim Parsons-TEX-ABOTA President, and Doug DeGrave-CAL-ABOTA President Elect.  UWWM has been a sponsor of this event for seven years and will continue to support FLABOTA and its many mediation and arbitration clients who are also members of ABOTA.