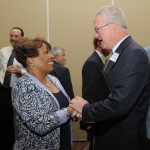 On Monday, June 4, 2012, Bob Cole of the UWWM Jacksonville office and immediate past president of FLABOTA, attended a reception for Justice Peggy Quince, Justice Barbara Pariente and Justice Fred Lewis - a campaign fundraiser for their merit retention elections this November. Bob represented Upchurch Watson White & Max in support of  the merit retention campaigns of all three justices.

The event was well attended by attorneys from around the State. With Court in session, Justice Peggy Quince was able to only briefly address the attendees before returning to her Supreme Court office. Other dignitaries in attendance were former Governor Reubin Askew and wife, Donna Lou, retired Justices Joseph Hatchett and Justice Leander J. Shaw,Jr.  and former Chief Judge of the 1st District Court of Appeal, James Joanos. 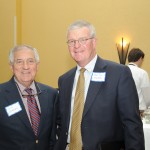