By Catherine Klasne
Mike Walls, Rodney Max and Art Hanes have followed up honors as Birmingham Magazine's Top Attorneys in mediation earlier this spring by being named to this year's edition of Alabama's Best Lawyers. 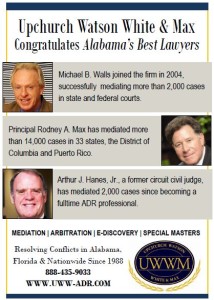 
The magazine will publish this month, and a link to the online edition can be found here: http://www.bestlawyers.com/Docs/Viewer.aspx?pub_id=58&year=2013.

Upchurch Watson White & Max opened its Alabama office in Birmingham in June 2002. Since then, the firm has provided mediation, arbitration and other forms of third-party neutral services to the bar, bench and community at large.

Led by Rodney Max, its mediators have conducted mediations since 1988, four year's before Alabama's formal mediation rules became final. The firm now has a strong base of mediators, which also includes Brad Wash, who became a certified mediator in 2002. He was formerly of counsel and mediator with Lucas, Petway, Tucker & Wash, P.C. He joined Upchurch Watson White & Max Mediation Group in January 2007.

The geographic scope of the group's mediation services extends throughout the state, and the subject-matter scope of its cases includes personal injury, wrongful death, commercial disputes, construction, environmental, trademark, patent, class and mass actions, plus other forms of federal and state statutory actions.

Upchurch Watson White & Max is a Florida- and Alabama-based professional association of more than 20 mediators. Our team of conflict resolution specialists practices in a wide range of alternative dispute resolution disciplines. Areas of practice include business mediation, arbitration, e-discovery mediation, and niche services such as multi-party, complex, malpractice and class action mediation. On the Web: www.uww-adr.com.