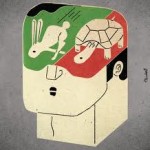 “Slow down, you move too fast.
You got to make the morning last.
Just kicking down the cobble stones.
Looking for fun and feelin' groovy.”

In his recent book*, behavioral psychologist and Nobel laureate Daniel Kahneman explains how brain system FAST and brain system SLOW-- once life or death for cave-dwellers-- continue to influence our decision-making. FAST operates automatically and quickly with little or no effort. FAST is the secret author of many of our judgments and choices. FAST is impulsive, intuitive and pre-programmed with our biases and unconscious rules of thumb that may be wholly erroneous. SLOW is more deliberate, rational and analytical. If we are consciously weighing our actions, SLOW is at work.

24. FAST creates problems in business meetings. Open discussion gives too much weight to those who speak early and assertively, causing others to line up behind them. Kahneman suggests all members of the committee summarize their positions in writing before the meeting. Their summaries may or may not be shared. This makes good use of the group’s diversity of knowledge and opinion and restrains the FAST hard chargers from undue influence on the group.

25. SLOW receives questions from FAST or else generates them itself. Either way, SLOW directs FAST’s attention and searches memory for answers.

26. Both FAST and SLOW act upon memory. We are conscious of some memories, unaware of others.

27. Beyond conscious and unconscious memories, there is nothing for FAST or SLOW to retrieve. Information we can’t retrieve might as well not exist. This is WYSIATI: “what you see is all there is”. If you can’t remember (consciously or unconsciously)… forget it.

28. FAST’s searchlights continuously monitor what’s going on outside and inside the mind, assessing our inner and outer worlds without any specific intention and with little or no effort.

29. When something attracts FAST’s attention it triggers immediate intuitive judgments laden with biases and rules of thumb. With a single glance at a stranger’s face, FAST instantaneously determines:

Members of the jury do this when the witness enters the courtroom.

30. FAST answers questions about other people we don’t realize we’re asking, and relies on evidence we can’t explain or defend.

31. If emotions are running high, FAST’s conclusions dominate any arguments with SLOW. SLOW becomes more of an apologist for FAST’s emotions than a critic— more endorser than an enforcer. Too bad SLOW seems neutralized when needed most.

32. Incapable of doubt, FAST suppresses ambiguity and spontaneously constructs stories that are coherent as possible. Unless SLOW immediately discounts the story, a ripple effect will spread through the mind as though the story were true. An example:

Boss is captivated by a new project or new line of business. Boss embraces the best case scenario confidently (and doubtlessly) rushing on, brushing aside the considerable risks. Boss’ SLOW can’t catch Boss’s eye. A sound decision may ultimately rely on the outspoken SLOWs of other people on Boss’s team.

33. SLOW is capable of doubt because SLOW can juggle incompatible possibilities at the same time. However, sustaining doubt is harder work than slip-sliding into certainty; and SLOW is lazy.

34. Much of what happens in the world is random, due to chance. FAST repudiates a random world by constructing stories to explain the causation of chance events. FAST’s causal explanations of chance events are inevitably wrong. An example: “Gasoline was $2.50 when I was Speaker of the House”.

35. FAST inhabits the public mind. Media reports of a minor event can activate a “public FAST”, escalating into widespread panic and ultimately large-scale government action. The issue becomes politically important because it is on everyone’s mind, generated by the media. Unfortunately, government action actuated by the public FAST isn’t counterbalanced by a “public SLOW”.  An example:

Politicians promise government remedies to a wide variety of angsts lodged in the public FAST, while at the same time promising to reduce the influence of government. Responsible fact-checking may not amount to a public SLOW-- but it’s a start.

36. Terrorism speaks directly to FAST. Rational or not, fear is painful and debilitating.

38. Biased reactions to risk are an important source of erratic and misplaced priorities in public policy. Risk regulation and government intervention to reduce risks should be guided by rational weighting of costs and benefits.

39. FAST and SLOW are both responsible for faulty intuitive judgments. FAST suggests them and SLOW endorses them. SLOW’S failure to challenge FAST’s intuition could arise out of ignorance or laziness. SLOW can be maddeningly insensitive to the quality of evidence.

40.Worthless information should not be treated differently from a complete lack of information, but WYSIATI (what you see is all there is) makes it very difficult to apply that principle. Unless SLOW decides immediately to reject evidence -- e.g. it was received from a liar -- FAST will automatically process the available information, however flimsy, as if it were true.

41. When in doubt about the quality of the evidence do the math and don’t stray far from what it tells you. Don’t expect this exercise of mathematical discipline to be easy—it requires a significant effort of self-monitoring and self-control. If the little evidence you have is not trustworthy, the math should dominate your estimates.

42. Always do the math. Our beliefs should be constrained by the logic of probability.

Kahneman would argue that if two of three family-owned companies fail to survive in second generation ownership, how valid is your intuition that your children can reverse that probability? And if fewer than 15% survive successfully into the third generation, what makes you think your grandchildren can reverse that even greater probability of failure?

43. Statistical probability matters even in the presence of compelling evidence in the particular case.

“Greetings from Lake Wobegone, where the children are all above average.”

45. The most coherent stories are not necessarily the most probable, but they are plausible. The notions of coherence, plausibility, and probability are easily confused by the unwary.

46. Uncritical substitution of plausibility for probability has pernicious effects on judgments when scenarios are used as tools of forecasting.

Your children attend college on scholarships.
Your grandchildren hold MBA degrees from prestigious universities.
Your intuition says their smarts can reverse the probabilities.

This is how we think of horses, refrigerators, and New York police officers. We hold in memory a representation of one or more “normal” members of each of these categories.

48. When the categories are social, these representations are called stereotypes. Some stereotypes are perniciously wrong, and hostile stereotyping can have dreadful consequences. But the psychological facts cannot be avoided. Stereotypes, both correct and false, are how we think of categories.

49. In sensitive social contexts, we do not want to draw erroneous conclusions about the individual from the statistics of the group. Opposition to profiling has been highly beneficial in creating a more civilized and equitable society.

51. People will not draw from statistical information an inference that conflicts with other beliefs e.g. the current controversy about climate change.

55. Our difficulties with the concept of regression to the mean originate with both FAST and SLOW. SLOW finds regression difficult to understand and learn. This is due in part to FAST’s demands for causal interpretations.  For example:

To conclude that a treatment or medication is effective, you must compare a group of patients who receive it to a “control group” that receives no treatment (or better yet receives a placebo). The control group is expected to improve by regression alone, and the aim of the experiment is to determine whether the treated patients improve more than regression can explain.

56. Forecasts made by engineers rely largely on look-up tables, precise calculations, and explicit analyses of outcomes on similar occasions.

57. Forecasts by others involve FAST intuition of two main varieties:

59. Moderating intuitive predictions must be taken seriously because absence of bias is not always what matters most. For a rational person, predictions that are unbiased and moderate should not present a problem. But we are not all rational, and some of us may need the security of distorted estimates to avoid paralysis.

60. Extreme predictions and a willingness to predict rare events from weak evidence are both manifestations of FAST. Be warned: your intuitions will deliver predictions that are too extreme and you will be inclined to put far too much faith in them.